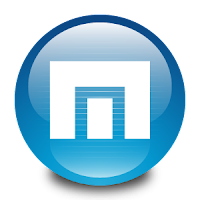 A malicious user can inject arbitrary JavaScript/HTML code through the websites visited with the Maxthon browser. The code injection is rendered into the History page (about:history), which displays URL and a short description of the visited pages. A malicious user can inject JavaScript/HTML content by using the location.hash property, as shown below:

Injected payload is rendered in both the <img> and <a> elements of a history item, as shown below:

Most recently, only a single injection point is possible after some silent fixes from Maxthon. The about:history is mapped to mx://res/history/index.htm, as shown in the screen shot below: 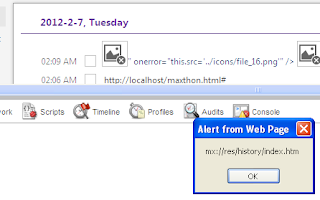 This vulnerability can be exploited in several ways. As the injection point is in the mx://res/ privileged browser zone, it is possible to bypass Same Origin Policy (SOP) protections, and also access Maxthon native JavaScript privileged functions which can be invoked from the Maxthon DOM object (e.g. maxthon.*). Such Maxthon object interfaces can be used to read and write from the file system, as well as execute arbitrary commands, steal stored passwords, or modify Maxthon configuration.

A malicious user would need to convince a user to visit a link to exploit this vulnerability.

The exploitation is divided into three phases:

[1] Create an entry in the history page which contains the injection - injection via location.hash

[2] Redirect browser to the about:history page to trigger execution in the Maxthon trusted zone maliciouspage.html would contain something as:

Note this redirection should not occur since it is invoked from a page on the Internet (http://) - due to the protocol mismatch, same-origin policy should trigger.

From the about:history which is mapped to the mx:// it is possible to invoke special DOM API interfaces and objects, such as maxthon.io and maxthon.program. These special objects can be misused to achieve code execution.

Following disclosure of the bugs during HITB2012AMS conference, it was observed that the maxthon.program object was silently removed by Maxthon in recent versions. This only allows a malicious user to read and write files on the system.

Code execution without incurring in a warning or user prompt can still be achieved by overwriting an executable which can be called directly by the browser. A "dirty" way is to overwrite j2plauncher.exe assuming the victim has either JRE/JDK installed on the machine. The second step would be to force Maxthon to load java.exe (e.g. create an iframe that points to a page which loads a Java Applet). This approach was successfully tested on Windows 7.